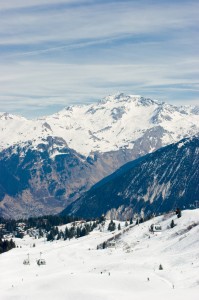 One of the most popular winter destinations in the U.S., Colorado is known throughout the world by skiers for it’s stunning mountain runs, perfect powder and wonderful resorts located throughout the state. Welcome to part six of our continuing journey through the fifty states as we take a closer look at the great state of Colorado on this installment of travel facts with Bill Bailey Travel Club.

Encompassing most of the Southern Rocky Mountains as well as part of the Colorado Plateau and the Great Plains, Colorado is a diverse landscape of both mountainous and wide open regions. Named for the red color found in the soil, the name was adopted by officials as the permanent name for the area in 1861. In 1876, Colorado become the 38th state admitted into the union and is now known as the Centennial state. Bordered by Wyoming, Nebraska, Kansas a small portion of Oklahoma, Utah and New Mexico, culture is as diverse as the landscape. A popular state, Colorado is a land of extremes in every sense of the word which makes for an ideal destination for travelers with a wide variety of interests today.

Take a look at some of the most unique and lesser known facts about Colorado on your journey to the 38th state with Bill Bailey Travel Club.