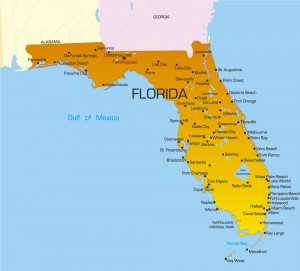 Travel with Bill Bailey Travel Club as we make our way through the United States. This series is to help you learn a few facts on the 50 states and what they have to offer you for your next vacation. Focusing on the little known facts, as well as those which will help you plan your next vacation in the U.S. we journey now to the state of Florida, one of the most well known travel destinations in the nation. Get to know more about this great state and what it has to offer you on your next vacation with Bill Bailey Travel Club.

Welcome To The Sunshine State From Bill Bailey Travel Club

Florida is one state that most people know at least a bit about. It’s popularity as a state to retire to, visit on spring break or just relax at year round makes it one of the most well known states in the U.S. Home to almost 19 million people, Florida was the 27th state to be admitted to the union on March 3, 1845. With over 76 million visitors in just one year alone, Florida is the top travel destination in the world earning almost 60 billion dollars in just a single year, making tourism one of the most important sources of income for the state.

Florida caters to this population of tourists by offering a huge variety of activities to meet all interests including:

With an area of over 65,000 square miles, Florida is the 22nd largest state in the US is home to Saint Augustine, the oldest European settlement in North America. Home to National Parks, state parks, theme parks, recreation areas and thousands of miles of beaches, it is easy to see why Florida is such a popular destination for travelers. Most every interest can be met from watersports and eco adventures to historical sites, fine dining experiences, arts and culture and some of the most well known resorts in the world. Below are a few more lesser known facts about the great state of Florida to help you get to know some of the more unique aspects.