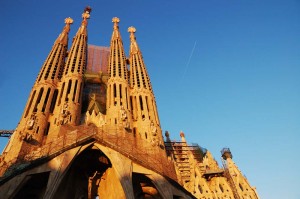 Capital of Catalonia, and second largest city in all of Spain, Barcelona has recently found itself leading the world in travel. One of the top 20 international destinations for travel today, Barcelona is home to over 5 million people and sees millions of visitors from around the world each year.

A leading travel, cultural, educational and economic center, Barcelona is the fourth economically powerful city by GDP in the European Union today. Founded first as a Roman city it later become on of the most powerful cities of the Crown of Aragon. Well known for its historical and architectural sites, Barcelona is home to a number of sites which are considered UNESCO World Heritage sites.

Located on the northeast coast of the Iberian Peninsula facing the Mediterranean Sea, Barcelona is well known for its comfortable Mediterranean Climate. With an average temperature ranging from the high 40’s in winter to the Mid to upper 70’s in summer, despite a few cool days, travel can be most pleasant throughout the year.

When traveling to Barcelona, there are just some sites which are considered “must sees” for any traveler. Including the center of the Old City of Barcelona which is the location of many structures which date back to even Medieval times to the Park Güell, Facade of the Nativity and crypt of the Sagrada Familia and the Columbus Monument. Also home to a large number of museums of art and history, this represents many of the cities top sites and attractions as well including the National Museum of Art of Catalonia, the Barcelona Museum of Contemporary Art and the Picasso Museum just to name a few. Its location on the water makes Barcelona’s beaches another top draw to the area as well. In fact, Barcelona Beach recently received the honor of being listed as one of the top ten city beaches in the world.

Internationally renowned and steeped in legend and history, Barcelona represents a popular bucket list destination for travelers worldwide and one of the top destinations for travel in 2013.

Bill Bailey Travel Club invites you to spend time again with us exploring and reviewing other top areas and destinations for travel.